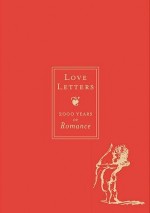 Over the ages handwritten letters have facilitated some of the most intimate exchanges between people. The words of love letters allow us insights into the private relationships of people across centuries, cultures and continents. While many anthologies of love letters exist, a book reproducing actual love letters in the author’s own hand has not previously been published and this book features letters from ancient Egypt to the present day. The original manuscripts of such letters grant the reader a direct connection with the person who actually wrote those personal words, sometimes many centuries ago.

This charming book reproduces and transcribes in full 25 love letters with engaging commentaries about the correspondents and their circumstances, as well as portraits of the writers and recipients. It includes letters by figures such as Henry VIII, Charles Dickens, Charlotte Bronte, Horatio Lord Nelson, Oscar Wilde and Mervyn Peake.

Andrea Clarke is Curator of Early Modern Historical and Classical Manuscripts at the British Library.