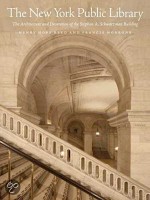 The New York Public Library, one of America’s architectural wonders, is possibly the finest classical building in the US. Designed by John Merven Carrere and Thomas Hastings, and inspired by the great classical buildings in Paris and Rome, it was completed in 1911. The library boasts a magnificent exterior but that is only the beginning. In the interior, one splendid hall follows another, an awesome gallery leads to richly decorated rooms and stairways are vaulted in marble. From the terrace to the breathtaking Main Reading Room is a triumphal way. All the devices of the classical tradition, the main artistic current of Western civilization, are brought into play. Maidens, cherubs and satyr masks look down from ceilings. Lions’ heads, paws, rams’ heads and griffins are on every side. In this beautiful volume, with new colour photography by Anne Day, showing off a thorough inside-and-out refurbishment, every facet of the building is described, including its inception and construction.
–
Henry Hope Reed is founder and president of Classical America and is the author of numerous books, including The Golden City and The New York Public Library. He lives in New York City.

Francis Morrone is an art and architecture critic who writes book reviews, film criticism, and design criticism for many publications. He has written architectural guides to Philadelphia and New York City. He lives in Brooklyn, New York.
—

The Library’s landmark building was named the Stephen A. Schwarzman Building for the Library Trustee in 2008 after his historic $100 million donation.

One Reply to “The New York Public Library – The Architecture and Decoration of the Stephen A. Schwarzman Building”